Finally, after around 4 years of development I’m glad to announce that the project Shadow Realm will finally see the light of day.

Shadow Realm is a custom EVO - RPG (hybrid) using OTC and around 1000 custom epic sprites with the goal of providing an awesome custom server, keeping the essence of tibia alive (PvP - Hunting - Questing) but also providing fun custom systems so the player feels a constant sensation of progress and improvement on this character based on the effort and time they invest into the game. In Shadow Realm, we have 10 custom continents, but obviously to make things interesting, each continent besides the first (main) are considered “Expansions”, to reach a new continent you and your team must beat the ultimate challenge at the end of each continent which is called  Continental Quest.

To make things real interesting we created a special monster level system, each level represents a special boost in monster’s values which allow us to provide amazing spawns which always represent a challenge for your level range! Be careful though, facing monsters stronger than your level will represent a huge risk, but of course will also be worth the hard work

In shadow realm one very spawn you have the risk to face custom and stronger variations of usual monster with special power, these special monsters are usually the most powerful warriors of each race so their strength is different than usual. Killing special monsters of this system will provide you useful to epic items and obviously an experience reward There are 3 classes in this system

Veteran: are usually the strongest monsters from a race, but they are easy to fight in low amounts by a single player.

Elites: Very powerful foes, usually too hard to kill by a single player, these monsters are rare to be found in a spawn, the yield lots of experience and will provide special loot.

Champions: This sort of monsters are extremely powerful, they are anomalies in the space time, born from the chaotic void itself, these monsters are very, very rare to find and they are considered mini bosses, soloing one of these creatures is extremely hard, a small to large team is required. Killing these creatures will grant 50x more experience than a normal spawn monster and it will also drop unique loot sent to the reward chest.

With all the dangerous monsters and adventures you can find around our world, it’s very important to upgrade your equipment as you progress in the game, doing that will make you way stronger and allow you to dive into the most dangerous places in each continent! 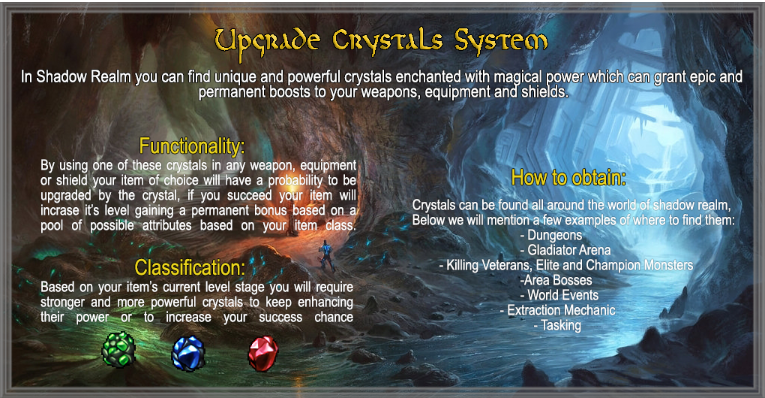 Using the crystals on weapons will increase your damage considerably, while upgrading your equipment and shield will make your character stronger, tankier and with a higher survival rate!

As you get experienced on the game you will be able to use and high benefit from the ancient powers hidden in shadow realm, the mystic forge will allow you to boost your equipment to a further and way more powerful state, allowing you the chance to become as powerful as your desire! 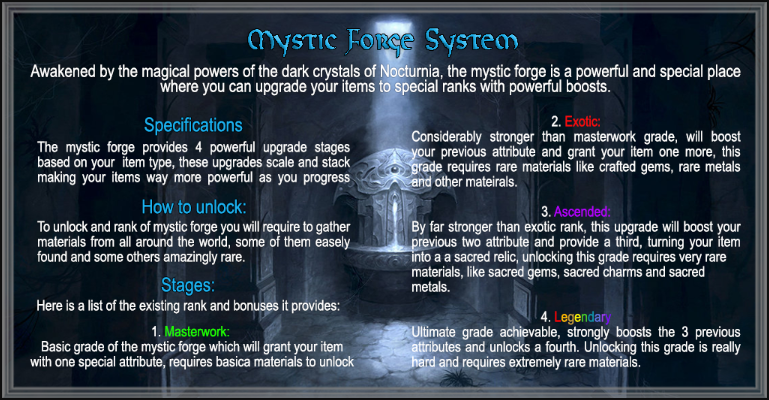 Work hard and unlock the best ranks for your item and conquer any dangers or any enemies!

In your daily life in Shadow Realm, you will face all sorts of challenges that will reward you with special points or stones which will unlock special points for your character that can be used in the ultimate mastery tree. 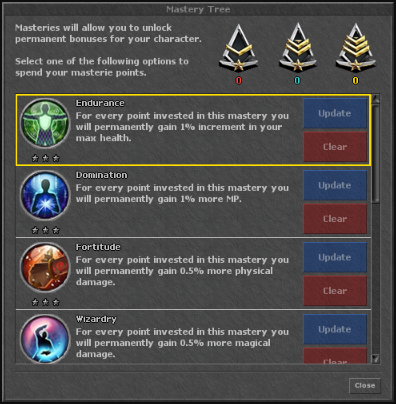 The mastery tree will give lots of possibilities to boost your char to fit your specific purposes, you can choose to raise your character as a tank, off tank, damage, survival, assassin, based on your mastery choices.

Like every awesome RPG game, the possibility of training your skills as a smith, gathering the proper materials and learning special knowledge is essential, in Shadow Realm, we provide you a very awesome way to create special and more powerful gear with our epic crafting system! 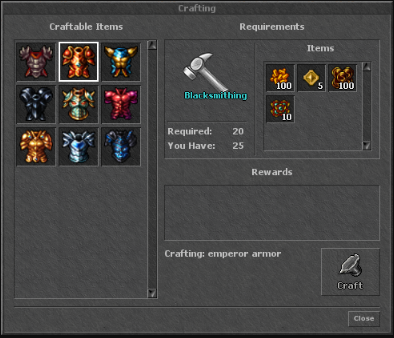 The possibilities with this system are endless, your progress in the game will allow you to gather the requirements to build your own gear, becoming the ultimate warrior in the world if your power of will is strong enough.

In Shadow Realm, we have several special systems which will allow you to face epic challenges every single day, one of those is the Dungeon System

The dungeon system will allow the players to choose among a huge pool of locations with scaling powerful challenges based on your level.

Choose the stage you desire to beat for any dungeon in your level range and be ready to fight! Besides choosing a dungeon difficulty we have a wide variety of dungeons with a core difficulty level, which means even if you are a high level there will be always dungeons that meet your strength standards!

You can choose between soling a dungeon and teaming up to beat the challenges these places have to offer!