We are happy to announce the official date of Shadow RealmвЂ™s new season on Friday 25 (3 days from now), after a long time of feedback and planning weвЂ™re happy to say we finally addressed some of the most concerning issues regarding progression that has been constantly an issue during the past 2 seasons.

Here is a list of the most important changes that you will encounter this time around.

1) Dungeons and Arenas reward boost.
On this upcoming season you will be rewarded with 50% more of the usual reward boxes in order to achieve our goal of rewarding manual players far more than just botters. 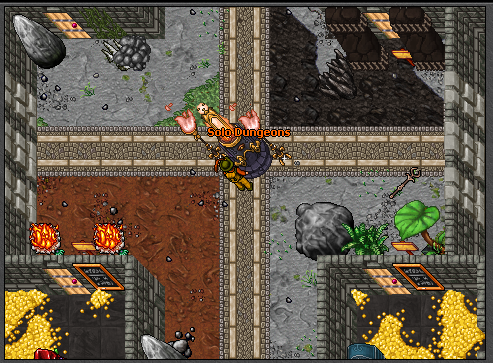 Orbs farming has been the meta for atleast a year already, unfortunately the system wasnвЂ™t able to achieve its purpose due to constant cheating and macroing, due to that reason in this season weвЂ™re deciding to make the system even for everyone removing its heavy impact on the meta of the game.

From now on you will be able to automatically collect orbs within a range of 11 sqms around you by paying an small fee of 2 energy per captured orb, due to this system now being automatic all orbs loot has been lowered in both chance and rewards to compensate for the possible long sessions of afk orb collecting.

3) Changes to tier sets and adjustment of tier items to craft next tier set (from 5 to 4)
First weвЂ™d like to say that this time around we are focusing on making tier set progression far more rewarding in sustain and PvM balance, unlike previous seasons where progressing in sets didnвЂ™t give an actual feel of being stronger and surviving better while progressing through continents this time around we increased resistance in all of our sets to give our players a far better hunting and questing experience while achieving new set pieces. As a complementation of the changes done to tier set we had to perform some important changes to the upgrading system, amulets, rings, ammo slot items and backpacks, from now on they wont follow the same upgrading cycle and equipment items, they are now granting the following cycle benefits when upgrading.

5) Improvements of Imbuements
With the same purpose of improving the possible choices of improving your character in different directions than usual we have decided to further boost certain imbuements.

6) The return of battlefield System

Battlefields was an important project left forgotten in the past but its finally ready to make its return, battlefield system is a huge combat area divided into 3 stages, after beating the first 2 missions you will gain access to an area based on your character stage (4 strength instances) where you will find monsters yielding the best possible orb rewards and highest orbs chance available in the game.

Battlefields are designed for you to power game through the duration of the event while staying active. 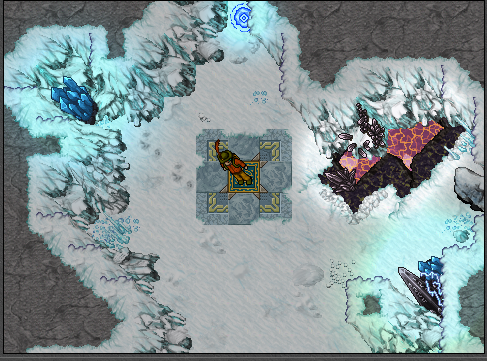 Bastions are special places in the game which can be only accessed purchasing bastion passes (different per continent), bastion passes provide 1 hour access to hunt in a formidable spawn with increased orb chances/rewards and also far highest exp than any normal spawn in a continent.

Bastions are also designed to power game with your team party, inside bastions you will be able to use special runes related to your vocation and also purchase special boosters for further performance boost while hunting.

Last season we managed to create one world boss raid per continent, this time around to further benefit the world boss system we have added a special drop (вЂњworld boss tokensвЂќ) which amount will be based on the continent in which the world raid is taking place.

World boss tokens will be used to purchase some special offers including some rare cosmetics yielding bonuses or even strength besides the traditional benefit you get by unlocking cosmetics.

Many of you have suggested through the eras to give each vocation a more special an unique feel making them different from the other vocations so this time we applied the following changes.

10) Implementation of Prey System and Prey Hunting tasks.
Similar to cipsoft prey system our prey system will allow you to choose between 4 different bonuses when selecting a creature.

These bonuses will allow you to improving your hunting as far as you please allowing you to better enjoy areas which you would normally not be able to hunt due to itвЂ™s difficulty.

Completing prey hunting tasks will grant you prey task points which will be usable at a very special shop with very unique and powerful rewards. 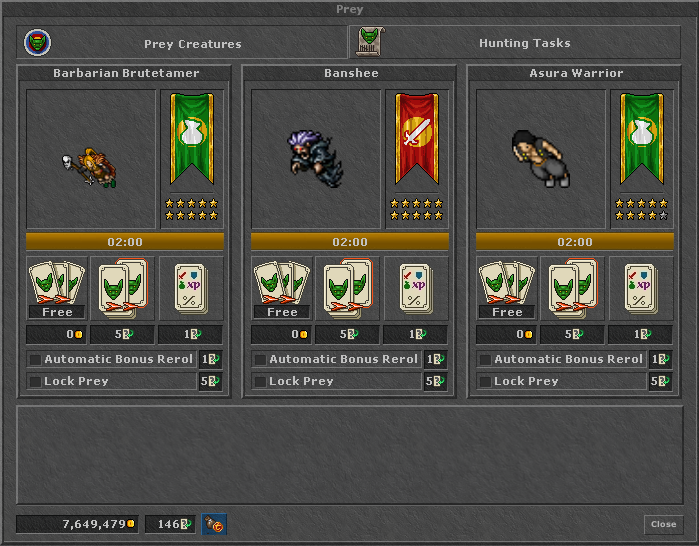 Last season we learned that granting players straight access to new continents based solely on their strength didnвЂ™t help us to achieve our main purpose so in this season we have decided to change it in the following way.

From this season on you will be able to find daily killing tasks in order to further increase the speed of your progression on each continent.

There is a huge amount of tasks available and each one of them provides loot boxes from completing them. 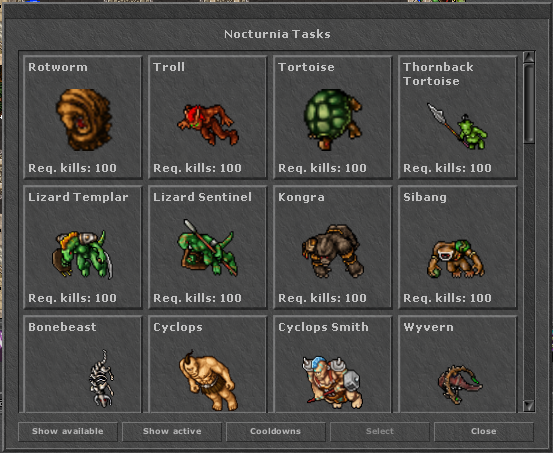 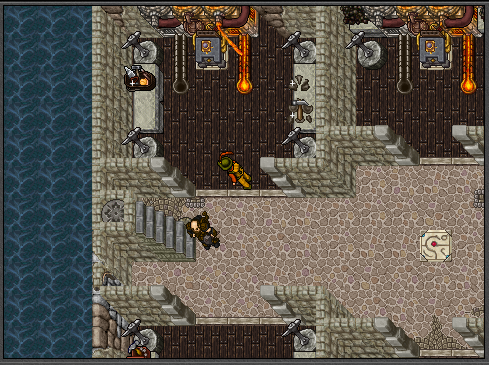