After a long period of testing we’re happy to announce our brand new season which brings a considerable amount of new features and content which will take your gaming experience to a whole new level.

Frontline Battlegrounds brings a whole new dynamic to your hunting, certain monsters have a chance to drop a portal where you will find a dungeon like 10 min battle experience, where you will face ferocious monsters and evil creatures which will grant you points per kill, these points will scale based on the difficulty of the frontline which is based on the killed monster and your current str.

Points obtained in the frondline battelgrounds can be spent in the frontline shop, located underneath Nocturnia’s temple This system brings a whole new meta gate for character building when it comes to upgrade your items, unlock/reset the rarity of an item and enjoy of its unique new abiities and boosted str values to take your build to a unexplored meta game Imbuements system has been a problem for a long time since the only valuable choice was protection, this time around we have removed protection to imbuements and moved them to traits system to provide imbuements a new feel and a whole new meta to build your items. Your prayers have been heard, we are glad to introduce you the fishing system rework!

From now on fishing will reward differently to the fisherman and the boss hunters, a whole new crafting skill has been implemented and old formulae reworked Enjoy your gains in the new fishing shop Yeah, its been a long time since people has been stuck in continent 5, but that time is over, we bring you a whole new task set, missions and special hunting places and quests on our 5.5 continent A long awaited mechanism which requires you to unlock waypoints across the map for fast traveling is now available, this is specially designed for spawns above cont 3.5 which require a huge walk to get there. 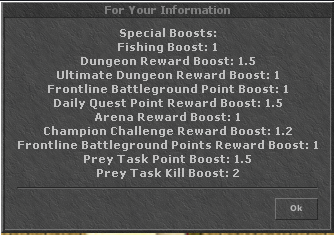 [King of the Hill Event]
1.This event will be granting to the winner guild 10% of expecience boost plus an extra random bonus among: Damage Boost, Healing Boost or Max HP/Mana percent.