Regarding hunting grounds we have implemented custom enhanced spawns rates on every creature ingame, this feature is designed to provide a fluent hunting experience even on the most transitated spawns ingame.

Besides the spawning rate we have also implemented a new feature called monster traps which can be found on every spawn, by clicking on this traps you will release the monsters inside resulting on increased monsters and better hunting experience when manual playing.

During the past months we noticed an important problem in continental quest which is related to how easy it was for some players to solo the quests without the need of any other player.

Since that problem totally breaks the concept of this system we have decided to enhance the mechanics of every continental quests bosses. From now on each boss will have an increased healing rate plus special spells targeting either players attacking from a considerable range and also for the blocker, these changes will prevent quests to be soloed while keeping a balance. 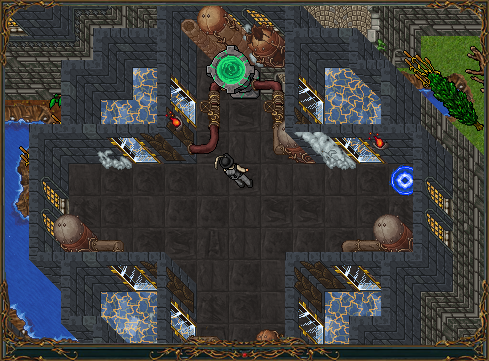 On this system we decided change most of the materials required per stage, previously this system was oriented to hardcore farming and grinding which resulted impossible by many players to ever achieving them plus benefiting people using a heavy amount of multi accouns and characters.

Our decision was to highly reduce the materials required plus making the current requirements achievable by doing daily challenges likes dungeons, arenas, world bosses and champion challenges instead of requiring a intense monster farming for days.

This system's functionaly remains the same but we have decided to implement crystals upgrading via crafting in order to allow players to make good use of all those low tier upgrades that are no longer useful for them. Masteries system is designed to be a long term progress system ingame allowing you to choose how to enhance specific aspects of your character to be stronger and more effective on the situations you decide, unfortunately a heavy amount of players managed to increase or max their masteries on a very early point of the game due to how easely was to obtain them.

To address the mentioned issue we decided to change the requirements of mastery stones required per stage on all masteries. Over time we have implemented the possibility of upgrading all the items used for character upgrading to higher tiers requiring several skills.
Investing on increasing your character crafting skills will result on the very usefull power to upgrade your mastery stones, upgrade crystals and spell stones to higher states.

Item Crafting:
By popular decision we have highly reduced the materials required to craft equipment using this system focusing mostly on doing continental quests to get the requirements instead of the constant non stop grinding.

Interface:
Overall we have highly improved our crafting interface providing more clear and understandable description of each craftable item.

This system was totally reworked, instead of the old system with static levels of every dungeon difficulty, the new system now randomly selects a dungeon for you, each dungeon will read your current level and strength level using that as parameter to match you against monsters that actually will represent a better challenge for you resulting as well in better and more worth rewards as you progress with your character.

Based on your current level and strength level the arena will now automatically adapt the monster levels to your character providing a better challenge and experience, resulting aswell in a better rewards the stronger your are.

It is now possible to invest larget amount of money for your champion challenge, the more money invested will represend on a higher amount of champion boxes as reward when beating the callenge. The only limitation is your power!

Throughout the past two months several new systems have been implemented to the game in order to make your daily life in the server more fun and interesting, our goal is to provide as much fun content as we can to allow you to keep enhancing your character to whatever point you decide!

Firestorm event: Survive by dodging the fireballs falling from the skies! the last 3 persons to survive are rewarded.

Safe Zone event: Beat your foes into stepping into the protection zone when the mightly powers of nature wreack havoc on unprotected tiles!

Zombie event: Run from the zombies and survive! every person bitten by the zombies die and loose their chance to win!

King of the Hill: Fight with your enemy guilds in order to conquer the throne! The player from any guild who manages to survive for 5 minutes standing on the throne will unlock a 15% experience bonus for all the members of their guild for 3 hours!

Battlefields Event: Twice a day the mages of nocturnia open the portals to the battlefields, arenas filled with evil creatures trying to lurk in to the realm of the humans, fight with courage and gain massive amounts of experience for a full hour! (System adapts by reading the levels of all the players inside the event)

Every 10 hours powerful bosses attempt to destroy the world of the humans, figth their minions and defeat the bosses! Every player who manages to fight and survive the boss fight will be rewarded!?

Begining of a new era

It has been a long road since we released the server 4 months ago, even after the heavy amount of work put into the development and the amount of testing time during the beta wasnвЂ™t enough to save us from unexpected and serious issues during our first months. Due to this issues atleast half of our player base left since the game was basically unplayable for a while, event which lead to a unevitable downfall of our player base ending up in a practically dead server which is now the reason for us to take the hard decision to begin a new season and relaunch the server on January 8, 2019 and 10am PT.

We totally understand how things like this can be completely dissapointing, but as anything in life good things are not easy to achieve, we learned from our mistakes and corrected our issues, we listened to our most experienced players and enhanced our features for them to be more challenging and fair-individual play based instead of a hardcore MC grinding style. ItвЂ™s important to say that we deeply appreciate and respect all the work and money everyone has invested on their characters and due to this we will be compensating you guys in the following way -
Donation coins: Every single dollar you have invested in this server will be kept bound to your account, which means even after this reset you will get every single donation coin back. That being said, giving all your points back on the launch of the new server would create a massive problem of balance and market saturation, which would lead into a items and power crysis which we surely want to avoid no matter what. Our solution to that problem is to give every point back by a вЂњCoin Drop SystemвЂќ which means periodically delivering back your points.
This is the official schedule of how donation coins - rewards will be returned.

Since a lot of players brought to our atention that this system was extremely based on randomless and luck, we decided to rework its mechanic to make it skill based.

From now on a warning tile will be displayed on the field which is about to be struck by fire!

For a long time by now we have been working hard on a structure which allows us to check in a more deep way the progress of a player in the game, today weвЂ™re glad to announce that our new strength formula is finally released.
The new strength formula takes the next things into consideration.

Alongside with these changes we have released a new command !leaderboard which will display the top 100 strongest players in the server.

Important Note: After the implementation of this system you must remain online for atleast 10 minutes for your characterвЂ™s strength to be stored and displayed in the leaderboard.(for those who havenвЂ™t been online in a while)

Since right now obtaining imbuement stones of higher tier is pretty hard, we have decided to implement them under the scribe crafting section!

Also a new imbuement вЂњsoulburstвЂќ focused on healing and damage reflection has been implemented.

We have changed the functionality of the smelting system, from now on there is no longer need to constantly be clicking and using the forge, you can now just throw the items there and get the rewards on your backpack

In order to further aid the progress of mid level players we have decided to make the following changes:

In this patch we have focused on performance enhancements and changes to improve playerвЂ™s game play with runes and events.

The changes mentioned above were made to allow power runes damage to increase with your magical or physical boost from set or other sources.