Donation coins: Every single dollar you have invested in this server will be kept bound to your account, which means even after this reset you will get every single donation coin back. That being said, giving all your points back on the launch of the new server would create a massive problem of balance and market saturation, which would lead into a items and strength gap crysis which we surely want to avoid no matter what. Our solution to that problem is to give every point back by a “Coin Drop System” which means periodically delivering back your points.
Remember that nocturnal tokens are converted to 2x shadows tokens on every season relaunch, outfits & mounts contracts and crates are not returned since they are highly influential in your achieved strength which will be rewarded with heritage points.

Now, regarding to the progress you achieved since our release and until the day the server is shut down to prepare for the relaunch. August, 15, 2019 at 10pm PT) Based on your final “Strength” achieved on your character you will receive a compensation in “Heritage Points”
This is how the Heritage Points will be assigned:

The heritage shop will be available since day 1 and its offers will be different from this season’s.

It’s been a really long time since we updated our donation store offers so it’s about time to bring you these awesome special deals! 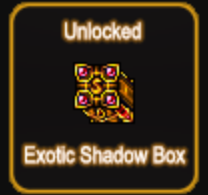 Within this patch the following things happened:

Our new huge dungeon rework has arrived with the sole purpose of providing a fair and constantly expanding challenging experience for everyone.

The new features of the dungeons are the following:

Here is a list of the possible rewards of each (currently available) dungeon tier boxes. (chances and amounts wont be disclosed)

These new coins will provide you 1 dungeon achievement point plus some experience when using them.

By gathering them you will unlock achievements with secret bonuses for your character!